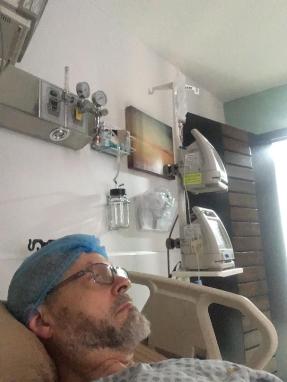 On the night of Wednesday, August 12, I thought for sure that I was coming down with a case of CV-19. We had been to a Mexican supermarket on the west side of town in search of nopales (prickly pear leaves, incredibly high in antioxidant). A few people in the mercado were probably not legally resident in the state of Georgia. Even those who were so might have staged a vacation from Mexico to parts north in order to escape the COVID outbreak in their homeland, which peaked there a good two months later than it did here. Mexicans also tend to have some genetic component (and “Mexican” itself is not a racial designation, by the way) which is less resistant to corona viruses than is the more Caucasian mix of DNA. So… with my sore throat settling into my lungs and a splitting headache going like fireworks, I was sure by midnight that I had managed to acquire more than cactus leaves on that excursion.

During the next day, however, the respiratory symptoms quickly vanished. The headache remitted slightly, as well—but it was succeeded by something more alarming. The right side of my face appeared to be mildly paralyzed. My smile was entirely lopsided. My right brow wouldn’t lift, and my right lid would hardly close. Half of my mouth had grown so lazy that my speech was slurred. I had suffered a mild stroke. No doubt about it.

What’s far less clear is where this disease comes from. My helpful ER doctor insisted that deer ticks bear it, and the Internet supports that theory… at times. But both the Mayo Clinic’s site and Web MD beg to differ, cautioning that we really don’t know. There may be a connection with cold viruses or sinus infections. My property is sometimes practically overrun with deer; but I also always use insect repellent before working in the undergrowth, always wash off carefully after returning indoors, and have never found a tick on board. I had indeed been hacking away at overgrown brush like a convict on Devil’s Island after my five-week visit to the Immunity Therapy Center in Tijuana (where my prostate cancer was stopped in its tracks and chased back to normal levels). The opportunity to be jumped by a tick was certainly there… but so was the opportunity to bung up my sinuses badly, which I had in fact done. Undetected tick or sinus infection: either one was a credible candidate.

Part of the ER doctor’s prescribed treatment was to visit a neurologist. Thanks to a cancellation out of the blue, we were able to see a highly esteemed one the following Tuesday. He listened to my whole story: not just the terrifying Wednesday night and more terrifying Thursday, but the history of my prostate cancer. Somewhere along our ride, I sensed the train easing off the rails. This specialist seemed more interested in the narrative behind my cancer than in the much briefer story of my Bell’s Palsy. Thinking out loud, he observed that prostate cancer likes to shift to bones, as mine in fact did; and he questioned me closely about whether I recalled any mention in my long-ago bone scan’s lab report of metastasis having proceeded from pelvis and hips up to the neck region. “We neurologists don’t believe in coincidences,” he murmured apothegmatically at one point.

If that was a joke, I found it to be in distinctly bad taste. Was he implying that I had cancer in my brain now—that a growing tumor might have touched off Bell’s-like symptoms? Wasn’t he implying precisely that?

But he waved aside his own insinuations, noting that the scan done in the ER five days earlier revealed absolutely nothing unusual. Yet he still asked my permission to access the three-months-earlier scan done to assess the stage of my cancer.

Why? Wasn’t a brain scan done five days earlier evidence enough? Even if the more distant bone scan mentioned a trace of cancer around the upper spine, that was then and this was now. My treatment at ITC had driven my PSA score down from 295 to 4.3!

What about the little detail that I had all the symptoms of Bell’s Palsy, and that a tumor would have announced its presence gradually rather than exploding like an H-Bomb in my skull?

What about the further little detail that I was already improving? (And as I sit writing, the improvement is utterly beyond question; recovery from Bell’s Palsy is said to take three to six months, but in one week I have recovered significant muscular function.)

And, okay: the scientist mistrusts coincidence. So let’s say that I’d had a recent heart attack rather than cancer: would Bell’s be related to my cardiac? What if I were diabetic? Has to be a connection… right? We don’t know the exact cause of Bell’s. Therefore, anyone who has it along with any other condition may be susceptible to theories about a connection between BP and his other condition.

What kind of logic is that? Why did I have to take half a day off and saddle Medicare with another charge just to listen to such claptrap?

I’m sorry, but… but what kind of human being treats other people this way as routine practice? My wife, who attended the entire consultation with me—and who also used to work with an ophthalmologist—commented that doctors often think out loud in this manner. But… why? It doesn’t strike me as very professional. If a cop finds a wife quivering on her doorstep as she recounts the details of a break-in but observes the husband standing strangely cool in the background, does he say, “Excuse me, madam… just thinking out loud. But have you given any thought to the possibility that your husband staged the whole thing and is going to sell your jewels after pocketing the insurance money?”

“Thinking out loud” is not necessarily a good idea. It’s usually a very bad idea if not done in intimate company. When you’re a cancer patient and you have to put up with person after well-meaning person almost bursting into tears with, “I’m so sorry this is happening to you!”—when you keep telling people, “I’m not done yet, by a long shot,” and ginning up your spirits for the battle… pretty much the last thing on earth you need is a guy in a white coat sprinkling in, “Could be that cancer’s making a comeback. I’d like to check on that.”

Yeah, you just check on that. You have a clean test that’s less than a week old—but you go ahead and dig back a quarter of a year for the same information. See if you can build some kind of argument to discredit the non-traditional treatments that saved my life. Or if that’s not your game… well, just keep slopping your stray thoughts over the lip of the pail. Don’t mind me.

I didn’t meet any doctors like this in Tijuana; but since my rash of health problems in 2020, I’ve met more than a few in the USA. Not ER doctors: no, I mean specialists. Men at the peak of their profession. My best guess is that there’s something perverse in the way we train our sawbones class. They don’t view patient morale as a factor in cure. I’m close to wondering, indeed, if they view the deliberate fracturing of morale as a useful step in treatment. Crush the patient: convince him that he has no hope whatever other than to surrender himself abjectly into your hands. Then do with him whatever you did with cadavers and Rhesus monkeys during your training and research. That’s his best chance: recognizing you as God Almighty.

Is this the training that Anthony Fauci and Deborah Birx received? Is it why they and their cohort seem to take a professional pleasure in seeing people of my son’s generation beset with depression and suicide—because now “they will look to no one but us for salvation”? Is that why such elite healers would rather drive our children to despair and self-destruction than allow life to return to normal with the aid of a drug having a century’s worth of reliable successes?

I can’t help it. I’m really starting to loathe American doctors. I see the animating, redeeming power of the spirit on one side… and then I look to the other, and I see white coats and stethoscopes.