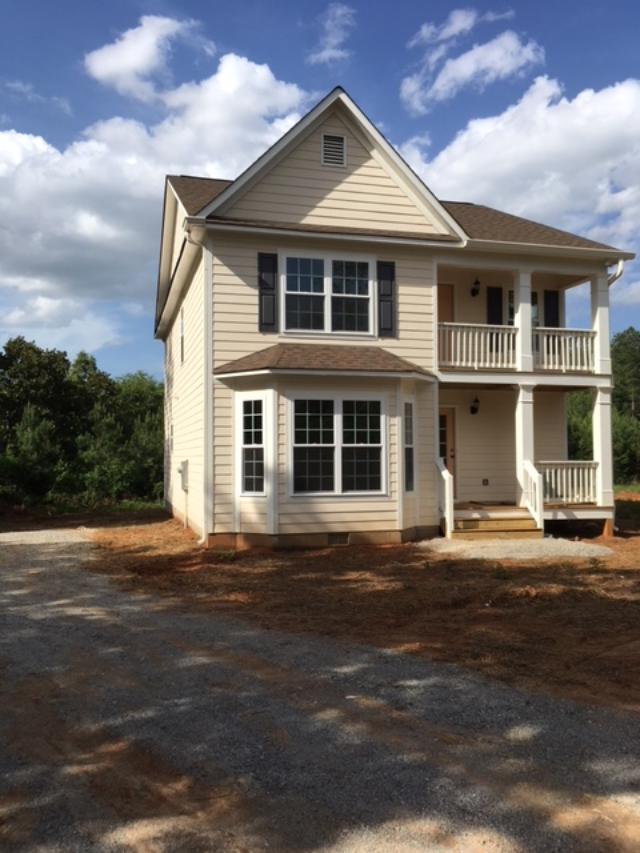 We spent all of July 3 and 4 in a house possessed of little furniture, as yet: a small table, three deck chairs, a pocket-sized refrigerator retrieved from a college dorm, and a cot (I slept in a bedroll on the floor).  By day, I spent most of my time swing-blading weeds that had grown waist-high since the construction crew last plowed an industrial mower through them (obviously months ago) and trying to pound holes in rock for my garden transplants.  The scything was urgent.  Wild critters tend not to approach a domicile too closely if you make and maintain a clearing, but they grow pretty bold if you have underbrush scratching at your windows.  As for the rocky soil, which thoroughly shocked me… I finally figured out that the builder had bored down to bedrock for the house’s foundation—good, very good—and had then simply strewn his stony shavings and scrapings all over the lot, to be kneaded into the red clay by massive treads.  Not so good.  And the same bulldozers had left piles of brush along the original clearing’s boundary rather than hauling off the deadwood.

I don’t know how much of such “minimalist” execution of duties is routine these days.  I recall my grandmother’s house in Austin, built in about 1875.  Yes, the floors creaked and the plumbing and electricity presented constant problems, even when I was a child; but the faux fireplaces were true works of art, and the plastering and wallpapering had lasted for decades without showing wear.  Frankly, the woodwork, for all its creaks, was sound and fresh.  All the corners joined.  In my new house, occasional stretches of molding are not even glued or nailed in along the floor.

I have to conclude that, a hundred years ago, people cared about the job they did.  They depended more on word-of-mouth advertising and repeat custom, true enough; but I also tend to believe that they just took more pride in their craft.  Now contractors are forced to engage gangs of laborers who move from job to job almost like gypsies, many speaking no English and having no sentimental tie to the region where this week’s contract takes them.  “In and Out” is apparently the name of a trendy hamburger franchise.  It might as well be the brand name of our entire private sector.

All of that having been said, I got a lot of satisfaction from clearing most of my “compound” out with my two hands in just a few hours.  I infinitely prefer such labor to pushing a snarly mower around the lawn, back and forth and forth and back, so that my curbside doesn’t embarrass the neighbors and draw a pink slip from the homeowners’ association.  The litter piles probably aren’t as bad as I’d thought at first.  I can burn the deadwood in a trench, little by little, and fertilize my grounds with the ashes.

Pounded rock and all, the soil in its present state hadn’t dissuaded most of my transplanted peanuts from greening up by the time we left.  (I’m going to let them stay in the ground and spread this fall; they’re my future protein source in the event of societal and infrastructural calamity.)  The Georgia rain had murdered two out of my three cactuses—but the antioxidant-rich prickly pear were booming along.  My blueberry and goji bushes were nestled in soft soil next to the house, safely within the deadly shoals created by the bulldozers.  They, too, would be fine in my absence.

On the outskirts of the rocky shoal, I at last found sufficient good dirt to plant my trees.  Oddly enough, the orange tree (which represents the last of any kind that I’ve been able to grow from grocery-store produce: GMO proponents take heed) seems to resist all efforts to kill it.  The pomegranates didn’t appreciate being blown about in a 70 mph wind for eleven hours… but some of them, too, will survive.  The pecan and apple had been dug up too soon in Texas, thanks to the builder’s continual fudging about our move-in date, and the former has undoubtedly fled its roots to wander Pecan Shadowland in spirit; but the apple, miraculously, was sending up the tiniest of green shoots out of an unpromising stump as we prepared to leave.  I thought of Noah’s doves.

For housing my tools, I had hurriedly bought a prefab shed at Home Depot.  (Rubbermaid, of all people, makes them!)  One of the features I liked was the solid floor pad—but I discovered that I hadn’t leveled a space with enough attention to create perfect stability.  I’ll carry back some old plywood pieces from Texas on my final run to slip beneath the pad.  Here and on several other occasions, I was struck by the importance of being “on the ground” and actually doing the job if one is to know what the job entails.  That our preferred method of operation, in all official—especially governmental—undertakings is instead to stick to some master-plan generated by remote bureaucracies doesn’t bode well for the nation.  There’s probably more energy, time, and expense wasted in conforming to inefficient boilerplate models than you’d spend in entering a work zone with no plan at all and flying by the seat of your pants.

The county code, for instance, requires that hot water heaters have pans beneath them if placed in the attic—but the dopes who drafted this wording assumed the presence of a single-story dwelling. Our tank is on the second story, not in the attic; so it lacks the pan necessary to ensure that the house isn’t ruined in the event of a rupture, and we’ll have to get a plumber out on our own to correct the gaffe.

At dusk on our final day, as she adjusted the cot, my wife alerted me that a “cougar” was walking along the gravel drive.  It turned out to be a bobcat—a colorless, long-legged silhouette ambling into the shrouded west.  I’m going to have to convince her to carry a small sidearm on her walks if she’s making T-Rexes out of geckos… and I thought she was a country girl!

My bedroll held down the far side of the fort (since we’re still a little unsure of what visitors might prowl by night).  From the floor, I stared for a long time at rising stars whose names I once knew but have mostly forgotten.  Sirius, Betelgeuse, Altair… Arcturus, Deneb, Antares… was any of these any of those?  Four decades have passed since I was a kid on the fringe of Fort Worth, inhabiting the last house before a prairie began.  Now all of that area is concrete, tarmac, traffic, and smog—and I’ve been living in other cities similarly immersed in a suffocating progress.  I need to go back to school and re-learn my constellations.  I should have plenty of leisure to do so, if God is patient with me.