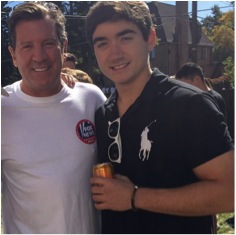 As the father of an only child who just graduated from a college in—of all places—Colorado, I was deeply saddened to hear that disgraced FOX News personality Eric Bolling’s only child Chase was found dead at his campus in Boulder. Apparently the boy had overdosed on some drug or other. Naturally, speculation about suicide runs rampant, given the notoriety that Eric had lately collected about the family name. At the very least, Chase must have been driven to the drug in a retreat from a situation that, by several accounts, was tremendously upsetting to him.

And understandably so. When your dad is accused of photographing his membrum virile for the benefit of certain women he wished to impress and sending them the portrait—and when his defense is a heated, “I don’t remember doing that!”—your filial universe has to be turned inside-out. Really, Dad? You don’t remember? So that’s something you just practically never do with the photos you take of Mr. Johnson?

At the same time, it occurs to me that a good many other segments in our society might share a little of the blame for this boy’s fate. What about the U of Colorado, and our colleges in general? What have they done to curb the culture of easy hook-ups, boozy parties, easily available drugs, and aloof professors? Professors, yes… for most of this boy’s teachers are bound to have known who he was. Because his dad was a hated Trumpista employed by the hated FOX network, did they decline to reflect for a moment that he was probably going through a very hard time? Did they, perhaps—God forbid—even add to his burden with a snarky comment or two? I almost don’t want to know.

Of the state of Colorado and pharmacophilia, I will say nothing, for I think little more needs to be said than this: when you acknowledge before young people the acceptability of altering unpleasant moods artificially, you purchase a small share of tragedies like Chase’s.

I’m not going to let neo-feminism off the hook, either. I think Bolling Senior probably has some utterly disreputable behavior to answer for, as I wrote weeks ago; and his “manly” bluster on behalf of Mr. Trump did not reassure me last year that his and my notions of male maturity had much in common. Yet as a young man in the Eighties whom women frequently refused to date a second time after the first adventure failed to land us in bed (thanks to my religious scruples and my distaste for exploiting giddy fools), I sincerely wonder just how many guys living in Eric’s New York fast lane get good results from obscene selfies and all the rest. I’m guessing that certain women must respond to such things in an encouraging manner; and I’m willing to suppose, even, that some of the women who accused Bolling months after the fact weren’t overly insulted until the hunt for his head was on.

How much of this crap—the lewd photos, the leers, the pawing, the dashes to a hotel at midday, the frolics on the office couch… the later fallings-out, the belated charges, the counter-charges, the broken marriages, the public disgrace, the professional meltdowns… the drinking, the drugs, the deep depression, the longing to be out of this world—how much of it would envelop us if feminists long ago had decided that imitating the very worst male behavior wasn’t necessarily the best way to prove they “had balls”?

How many young people have died because the older generation has created a moral Chernobyl amid whose toxic fumes they were somehow supposed to find adulthood without guidance?