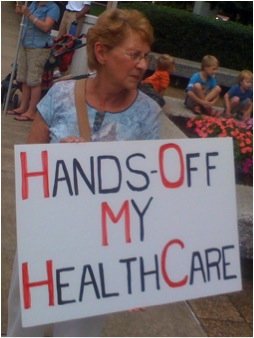 We’ve bought a nice little piece of land in the Appalachian foothills where I plan to grow almonds and apples, just to name the two that begin my list alphabetically. I have cans and canisters of seeds saved from years and years ago which I intend to plant. We’ll see what actually comes up. Thanks to genetic modification, very few of the fruits and vegetables I would have bought at the grocery store over the past six or eight years will ever produce anything from their seeds. That’s a frightening thought, and one of the reasons I want my own land with my own food growing on it. Some day, Big Brother is going to be deciding who gets viable seeds and who doesn’t, because nothing in our commercially purchased food will reproduce. I’m sure the basis of selection will be “first come, first served”… just as I’m sure that the single year my tax-exempt charity was hounded by the IRS had nothing to do with Lois Lerner’s reign.

At the entrance to my property sit two rusty old gates. They won’t keep out any hunters who really want in, but they might be a mild deterrent to teenagers looking for some place to drive into the woods and smoke weed or run anatomy experiments. The previous owners don’t seem to care about the gates sufficiently to take them down, and we’re glad enough to have them since we are not yet in situ. It might be said that the gates are now ours: the property is ours, and the gates were a free gift. Kind of.

But what happens if, after we’re moved in and well settled, the previous owners show up and want their gates back? They say, “You know, leaving them didn’t seem like a problem before… but now we’re running really short of cash. We need another pair of gates on our farm but can’t afford to buy them—so, naturally, we thought of these two. Sorry that you got used to them, or that we let you get used to them… but they weren’t ever part of the original sale. You realize that, don’t you? You didn’t pay a penny for them. They were a freebee, given on the assumption that we had unlimited money in the bank. Turns out that we don’t, so… now we need them back.”

I would look pretty stupid, wouldn’t I?