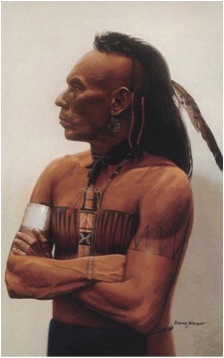 Voltaire wrote a short novel titled L’Ingénu about a stoical Huron who had been transported to Paris and proceeded to make one disturbingly sensible criticism after another of Europe’s most “advanced” culture. Imagine such an ingenuous, naïve reasoner engaged in a conversation with an exponent of rigid Christian orthodoxy. I shall dub the latter the Catechist: that is, one who corrects gullible young people endowed only with common sense about what they must believe to qualify as faithful.

Huron: I understand that Christ is the perfect man, such as none other of our kind ever was or ever will be. He is without sin, and his example is one that we can only approach but never reach. What I do not understand is your insistence that his blood was required to cleanse the rest of us of our sins.

Catechist: That is because of your heathen presumptions. Just as none of us could ever lead a life wholly without sin, so we could never break the cycle of sin and find redemption before God without the intercession of Christ.

Huron: Why? Why is God so vengeful that He demands a slaughter before He will forgive us for being as He made us?

Catechist: Hold thy tongue! God asked but one thing of us when He created Adam and Eve: to abstain from the fruit of the Tree of Knowledge. It was a modest stricture, yet we broke it.

Huron: Adam and Eve broke it—for I will not hold my tongue, an it please thee or please thee not. Nay, I will ask further, what just man punisheth a great-grandchild for his distant ancestor’s trespass? Is that not true heathenry, such as is practiced by the tribe I left behind?

Catechist: I see thou art a retrograde subject. Know, then, that all of us are Adam and Eve. As they two did, so we all most certainly would have done in their place.

Huron: I accept that—and I go farther. Theirs was an act of defiance, yet true sin lies in the mere thought, the intent. One of us who should crave and long to know the forbidden yet refrains from pulling back the veil in a coward’s fear of reprisal is just as guilty as Adam but without Adam’s courage.

Catechist: There is a perverse kind of truth in what you say. So do you accept, then, that we were all under sentence of death before Christ took our punishment upon his head?

Huron: I do, yet I do not. What I cannot accept is that an all-just God would condemn to death any man, much less all men, for drawing veils, when it is our self-destructive nature to probe beyond what we can understand. Even an ordinary, fallen man is likely to have enough goodness in his heart that he would not inflict the ultimate penalty on another for so pitiable a failure,

Catechist: But God does not think as you and I do, fool!

Huron: No—He is infinitely more understanding and compassionate! From Him do we draw whatever inklings of enlightenment and mercy we possess. Yet you ask—you demand—that I picture Him as requiring our life’s blood for a stumble.

Catechist: You forget that Christ is God, or you have not paid enough attention to learn so earlier. God is no bloodthirsty Moloch demanding that His altars run red. No; He is a father who sent His beloved son to be the needed sacrifice.

Huron: But a son who is also his father is not like a mortal son of a mortal father, so the words “son” and “father” are more hindrance than help to speak this truth. And a father who would sacrifice his son rather than himself—and that to his own wrath, not to some alien threat—is inconceivable and insane to me.

Catechist: I cannot abide your blasphemy any longer. You are stiff-necked and irredeemable. You seem to believe that our corrupt nature is but a child’s blunder that makes his parent smile, not an abomination that only supernatural grace can reconcile to God’s goodness.

Huron: And you, teacher, refuse to see that I agree with you so much about God’s goodness that I cannot embrace the notion of an abominable reconcilement. Why do you insist that our human blood-rites will set us straight with God for our human blood-letting—for we are, truly, a sanguinary tribe, and our overreach for knowledge always ends up closing its fingers around the handle of a knife. Our errancy is no minor lapse, and I erred when I made it seem so. We kill God in our world when we make ourselves the gods of our world. But all the more reason to ask: why must you put blood on God’s hands?

Catechist: True faith is a gift… and thou hast it not, thou damnèd wretch!

Many of the “people of faith” I have known would be horrified to see that I had penned such a dialogue as the one above… but then, few of them spent more time talking to me than was needed to confirm that I am a nobody in this life. You can’t desist from speaking to someone whom you haven’t spoken to in years.