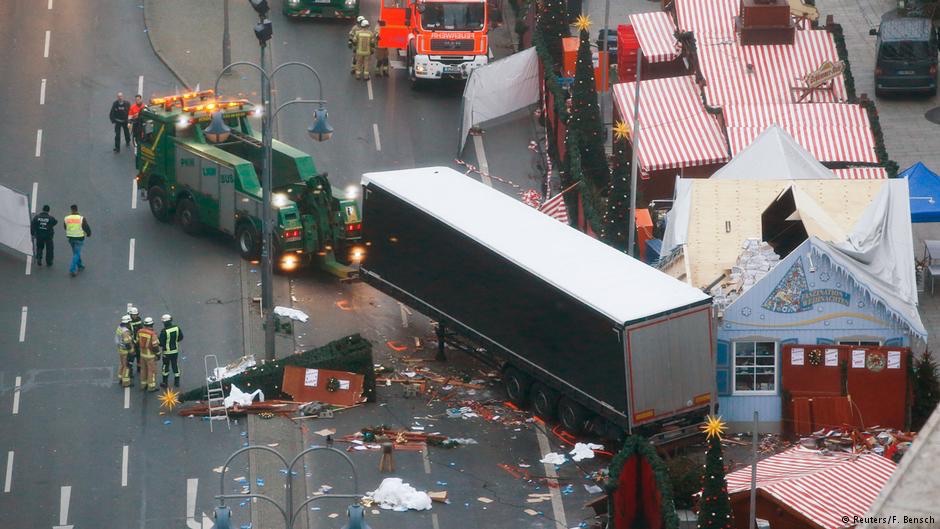 More than a day later, mainstream news outlets in Germany have only barely resolved–and only after receiving the blessing of their PC puppetmasters in Brussels–to call the Berlin marketplace slaughter a terrorist attack.  Nine bystanders were killed, and at least fifty more wounded, when a tractor-trailer plowed through a crowded shopping area in an attack distinctly reminiscent of the slaughter in Nice, France, a few months ago.  The legal driver, officially employed by the Polish trucking firm, was found stabbed to death in the passenger seat, and a 23-year-old Pakistani immigrant was apprehended fleeing the scene.  Yet the Deutsche Welle source from which I garnered details dropped the word “Polish” so often that one might have concluded the assault to be payback for the Third Reich’s leveling of Warsaw.  Oh, and a semi-automatic handgun was found in the cab.  It wasn’t used in the butchery–but we needed to know that the perp possessed such a forbidden item.

I’m really, really tired of politicized news, and I want to abstain from contributing to Such toxic slop in this space.  Allow me, then, merely to make two observations about terrorism which I’ve been repeating (to the interest of no one, apparently) since 9/11.

Observation One: massive, mounting unemployment is the inevitable destiny of unskilled laborers as the Industrial Revolution advances into its fully automated stage.    Young people were being siphoned off of farms and into cities as early as the late seventeeth century.  They could not always find employment, and what they found did not always pay a livable wage or escape the cyclical lay-offs integral to the free market.   They were never in any danger of being permanently replaced by robots, however. Now their descendants are in just such a pickle.  About the only work available to an uneducated street urchin is kidnapping and ransoming rich people or… growing and selling dope.  Ironically, the latter signals a return to agriculture.

Observatio Two: our high-tech world is encircling us in risk as sure as a python coils around its prey–yet we just keep calling for more coils.  We put ourselves in missiles filled with highly flamable explosive… and congratulate ourselves on modern air travel.  We build skyscrapers that may soon reach a mile into the clouds, if the one planned in Hong Kong gets off the drawing board… and we celebrate our economical use of space.  We construct major cities on seismic fault lines or along tsunami-prone coastlines… and we admire the view.  Soon our cars will be driven for us via satellite… and at this very instant I am wondering why my TV won’t pick up any channels.  We never ask before surrendering ourselves and our families to a new technology, “Now, how might this be abused by an evil mid?”  Never.  Always full speed ahead… and then we’re shocked when some unemployed, vindictive punk throws a wrench in the power grid.

At least some pieces of the terrorist puzzle are put on the table by the nightmare-rich potential of our surging, all-but-ungovernable technology.  Why can’t we use our high tech to irrigate the young punk’s ancestral desert, and send him home to farm?  But no, the great rivers of India and China are now too polluted to grow anything but killer bacteria; and as for the Middle East, the only rivers of any interest to us there run black.

One thought on “Two De-Politicized Thoughts About Terrorism”